Titled and signed on a label to the reverse:
A garden piece was designed and worked by me in 1938.¬† May Morris
From Miss May Morris, Kelmscott Manor, Lechlade, Gloucestershire. 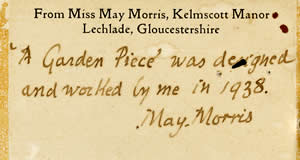 This embroidery is one of the last works produced by May Morris and is in outstanding condition, retaining its original colour. 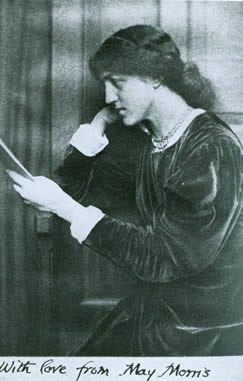 May
Morris was born in 1862, the daughter of William and Jane Morris.¬† She
was taught by her father and took over the firms embroidery department
in 1885.¬† Her jewellery, designed and made by her, included bead
necklaces strung in highly original combinations of colour and texture.¬†
She lectured in the USA in 1910 on embroidery, jewellery, costume and
pattern designing.¬† She taught embroidery at the Central School of Arts
and Crafts.

May Morris was born in 25 March 1862 at Red House, Bexleyheath, and was named Mary as she was born on the Feast of the Annunciation. May learned to embroider from her mother and her aunt Bessie Burden, who had been taught by William Morris. In 1881, she enrolled at the National Art Training School, the precursor of the Royal College of Art, to study embroidery. In 1885, aged 23, she became the director of the embroidery department at her father’s enterprise Morris & Co..

In 1886, May fell in love with Henry Halliday Sparling (1860-1924), the secretary of the Socialist League. Despite her mother’s concerns about her future son-on-law, they married 14 June 1890 at Fulham Register Office. The marriage broke down in 1894 over her affair with a former lover, the playwright George Bernard Shaw. The Sparlings were divorced in 1898 and May resumed her maiden name.

She edited her father’s Collected Works in 24 volumes for Longmans, Green and Company, published from 1910 to 1915, and also commissioned two houses, as had her mother Jane, to be built in the style that he loved after his death, and which are still standing in the village of Kelmscott in the Cotswolds in England.

May Morris was an influential embroideress and designer, although her contributions are often overshadowed by those of her father, a towering figure in the Arts and Crafts movement. Morris himself is credited with the resurrection of free-form embroidery in the style which would be termed art needlework. Art needlework emphasized freehand stitching and delicate shading in silk thread, and was thought to encourage self-expression in the needleworker; this contrasted sharply with the brightly coloured Berlin wool work needlepoint and its “paint by numbers” aesthetic which had gripped much of home embroidery in the mid-nineteenth century.

May Morris was active in the Royal School of Art Needlework (now Royal School of Needlework), founded as a charity in 1872 under the patronage of Princess Helena to maintain and develop the art of needlework through structured apprenticeships.