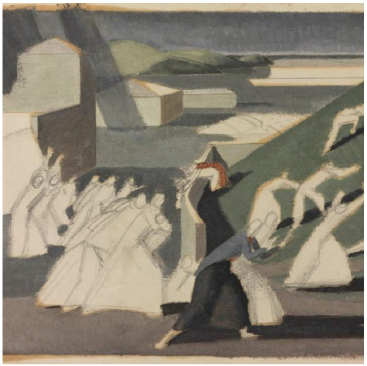 Compositional study for The Deluge, 1920. Credit: The Estate of Winifred Knights 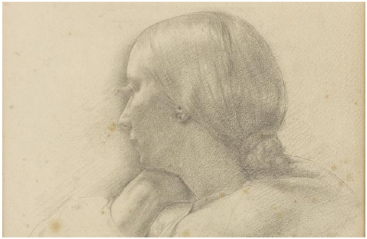 Scenes from The Life of Saint Martin of Tours. Credit: The Estate of Winifred Knights 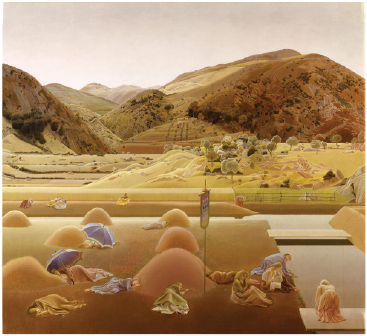 This striking scene, with its dynamic sideways rhythm, in which 21 figures clamber away from a waterfall towards a mountain, won a prestigious award, and made her name.

Knights was declared a “genius” for fusing Italian Quattrocento painting with angular Vorticist modernity, transforming a Biblical subject into a lament for the First World War. Aged just 21, she was earmarked for great things.

Yet, even though she subsequently painted an altarpiece for Canterbury Cathedral, when she died suddenly of a brain tumour, she received no obituary.

During her lifetime, she never exhibited by herself. Moreover, since her death, there hasn’t been a single retrospective of her work.

All of which makes Dulwich Picture Gallery’s exquisite new exhibition a revelation. Around 95 per cent of the 120 artworks on display have never been shown before.

Knights was born into a modest, middle-class family in the south London suburb of Streatham. She grew into a beautiful young woman known for her singular sense of style.

She always wore her hair, for instance, in the manner of Renaissance bombshells such as Leonardo da Vinci’s Belle Ferronniere.

Prodigiously gifted at drawing, she wanted to become a book illustrator, and enrolled at the Slade art school in 1915. She quickly became a star student, mentored by her exacting drawing tutor, Henry Tonks.

Curated by the freelance art historian Sacha Llewellyn, this astonishing exhibition tells Knight’s story immaculately. All five of her major paintings, accompanied by fascinating preparatory studies, are presented together for the first time. These include The Marriage at Cana (1923), which ended up in New Zealand after the Tate turned it down during the Fifties.

This spellbinding canvas records Knight’s infatuation with Italian art as well as her husband, the artist Thomas Monnington, with whom she began a love affair in Rome. Evoking Italian “Primitives” such as Piero della Francesca, without descending into pastiche, it has a serene, graceful, otherworldly quality.

Moreover, the composition is animated by several slices of juicy watermelon that glisten on a banquet table with the radiance of pink gemstones, offset by the surrounding palette of subdued creams, fawns, olive greens, dusky pinks, and browns.

Despite ravishing craftsmanship, however, Knight’s last major painting, the Canterbury altarpiece of 1928-33, was less successful. Under pressure from the bullying architect who had commissioned her, she abandoned ethereal colours and poetic atmosphere for something brighter and more “finished”. The result was mannered.

By the Thirties, the early promise of Knight’s career had given way to frustration. Increasingly she suffered from anxiety, which had afflicted her ever since a breakdown caused by Zeppelin air raids in 1917. Following the birth of a son in 1934, she effectively stopped painting.

Still, despite the fact that she was the polar opposite of prolific, it is shocking to discover that an artist blessed with this much talent could have been neglected for so long. Bravo, Dulwich Picture Gallery, for rescuing Knights from the deluge of obscurity.