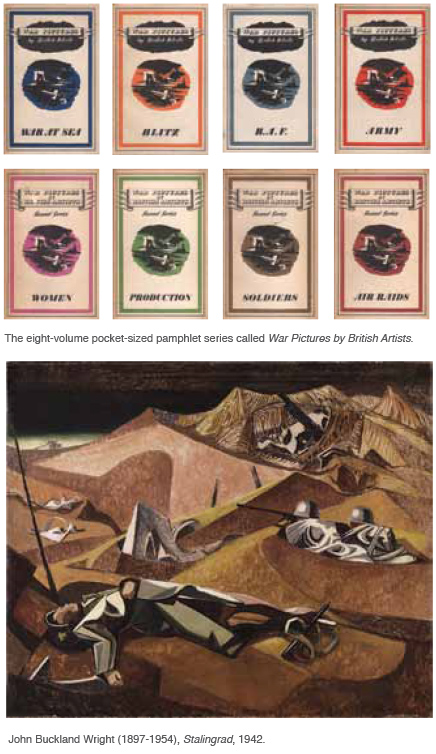 Artwork commissioned by the War Artists Advisory
Committee (WAAC) during the Second World War is due to
go on display at a new exhibition in London. Established by
the Ministry of Information in 1939, and chaired by National
Gallery director Kenneth Clark, the WAAC hired some 403
artists to document the conflict.
The committee’s self-stated
aim was to ‘draw up a list of artists qualified to record the
war at home and abroad’.

The exhibition takes its name from an eight-volume pocket-sized
pamphlet series called War Pictures by British Artists.
The series was published by Oxford University Press to
help promote official war art at the height of World War
II. The original booklets were issued in two batches, each
comprising four themed titles. War at Sea, RAF, Army, and
Blitz were published in 1942, and Soldiers, Production, Air
Raids and Women were issued one year later.

Owing to the booklets’ small size and the limitations of
20th-century printing, the artworks were reproduced in low-resolution
and without colour. But the first series was so
popular that the initial print run of 24,000 copies sold out in
just six months.

Many other wartime illustrators drew and painted privately,
their works gaining much less exposure. However, these
artists added to the richness of the artistic record of the war,
portraying it in a variety of styles and mediums, using
different materials to emphasise the messages of their
pictures.

This October, in conjunction with Liss Llewellyn Fine Art,
the Morley Gallery in London will showcase many original
WAAC pieces alongside unofficial war art from the same
period. Housed in Morley College, which was home to a
number of beautiful British murals destroyed during the
Blitz, the display is a fitting tribute to the devastating but not
insurmountable damage wrought by the Second World War.

WWII War Pictures by British Artists is on display from 28 October until 23 November 2016 at Morley Gallery in London.

Sacha Llewellyn and Paul Liss have edited and published a catalogue and essay collection to accompany the exhibition.