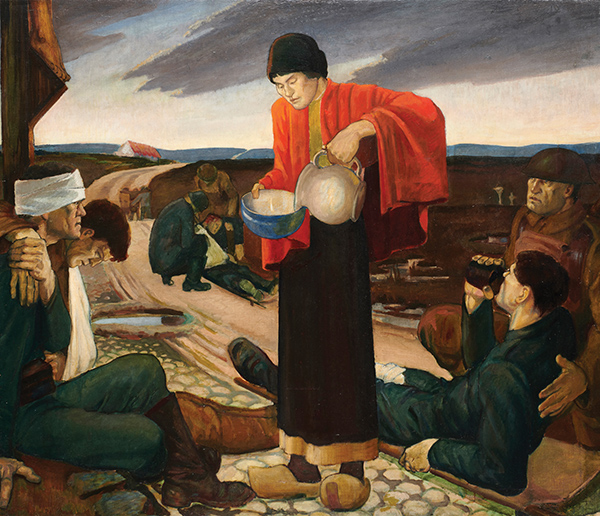 Keeping the Faith in Art: Hidden Gems go on Show

Bombs can obliterate the present, but they can also resurrect the past. Among the revelations of post-war reconstruction in the City of London was a beautiful recumbent Statue of The Dead Christ, a miraculous survival of pre-­Reforma­tion sacred art found buried beneath the floor of the Mercers’ Chapel.

Since its star appearance in Tate Britain’s 2013 exhibition “Art under Attack”, The Dead Christ has been back behind the grille separ­ating the rebuilt chapel from the Mercers’ Hall. But this month the statue is in congenial ­company as the hall hosts the exhibition “Art, Faith & Modernity” (viewable by appointment until 26 July, then at Liverpool Cathedral 6-30 August), designed by curators Liss Llewellyn to show that the best efforts of Protestant iconoclasts did not eradicate the religious impulse from the modern British soul.

The definition of “religious” is pretty broad. Some of the works on show were sacred commissions, like Charles Mahoney’s charming Angel Playing Tubular Bells, a 1940s study for his Lady Chapel murals at Oxford’s Campion Hall, and Frank Brangwyn’s lithographic Stations of the Cross (1934-35), a version of which is installed in the hall’s main chapel. Some were commissioned but never executed, like Glyn Jones’ darkly glowing Study for St Martin’s Altarpiece (c. 1927), mysteriously rejected by Canterbury Cathedral. But many were personal works that drew on religious symbolism in troubled times, such as The Good Samaritan (c. 1920) set in Flanders by an unknown artist who borrowed the simple style of Gauguin’s Breton period; it’s only when you lift your eyes above the horizon you notice the pair of feet at the base of a crucifix.

Though not anonymous, several of the artists featured are virtually unknown. One discovery for me was Robert Baker, who as a young graduate from the Royal College of Art painted Breakfast at Harlech College (c. 1935). Scratch the surface of this mural set in the canteen of a Welsh working man’s ­college and you’ll find a Last Supper: Baker goes off script in including Christ’s mother and Mary Magdalene at the breakfast table tucking into eggs and bacon.

The religious content of Evelyn Dunbar’s Seven Days (1939) is more elusive. Like her lover Charles Mahoney, Dunbar was a passionate gardener and, in this apparently cheerful design for a mural, Tuesday to Saturday are represented by figures carrying gardening tools, flowers and fruit, while Monday humps laundry and Sunday has her nose in a Bible. In an earlier sketch, Monday carried a baby and Sunday was eating cherries; the mood and symbolism changed after Dunbar miscarried Mahoney’s child. Nothing in this show is quite as powerful as the pre-Reformation Dead Christ, but for serious artists of any era every work is an act of faith.

To view the exhibition at the Mercers’ Hall, call 020 7520 9225 or email george@modernbritishartgallery.com