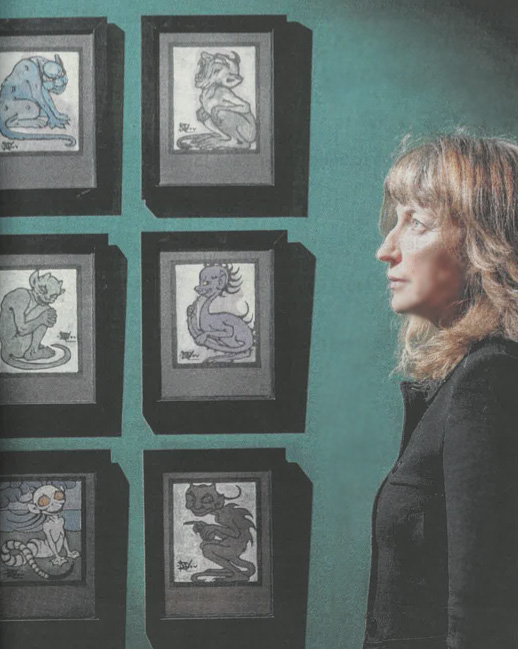 Heroines of all Hues

If you asked most people to reel off the names of famous British female artists from the first half of the 20th century it would, in all likelihood, be a short list. Wakefield’s finest, Barbara Hepworth, would surely be mentioned and perhaps Dora Carrington and Laura Knight, but beyond that they would probably be stumped. It’s an indication of the gender bias that existed at the time and which depressingly can still be found, albeit not to the same extent, today.

There were, however, an array of talented female painters, printers and sculptors at work at the time and they are celebrated in an exhibition at the Stanley & Audrey Burton Gallery at the University of Leeds.

Fifty Works by Fifty British Women Artists 1900-1950 builds on last year’s commemorations marking the centenary of partial suffrage for women and explores the long under-valued contributions of women to British art in the early 20th century, at a time when the country and the world were riven by upheaval.

The exhibition has been curated by Sacha Llewellyn who wanted to wave the flag for artists who in many cases have been all but forgotten. “When I was putting this exhibition together, a lot of people thought I wouldn’t to be able to find so British women artists to show. In the end, I could have shown 500. It’s not just about rounding up lost heroines, it’s about retelling their stories,” she says.

“I didn’t want to create an exhibition that’s judged as much on the women who’ve been left out as those left in. I’ve included some known and lesser known artists, but they’re not Sunday painters – they’re all professional artists who had careers.”

Many of these women didn’t get the recognition they deserve. “Though they had an art education and enjoyed successful careers, they aren’t part of the art historical narrative and as a result many of these artists have fallen into obscurity,” adds Llewellyn.

She chose each picture based on its merits and what it said about the artist. “I wanted to dispel the notion that women only painted flowers and landscapes. They were remarkably talented and if you look at their work it shows they weren’t just painting pretty pictures. Their work was often political and hard-hitting.”

As part of the exhibition, each of the works has an accompanying commentary with contributions from family members as well as actors, writers and journalists.

Among the 50 works on show are examples from a series of woodcuts by Marion Wallace Dunlop. Devils in Diverse Shapes were first displayed in 1905. Dunlop was an active member of the Women’s Social and Political Union, and three years later was arrested and imprisoned in Holloway for leading a deputation to the House of Commons. It was here that she went on hunger strike, becoming the first British suffragette to take such action.

Winifred Knights is also among the artists featured with Edge of Abruzzi: Boat with Three People on a Lake. “She was a prize winner at the Slade school and was the first woman to win the Rome Scholarship. She was collected by all the famous patrons of the day, but for a long time nobody had heard of her,” says Llewellyn.

Gladys Hynes was a painter, sculptor and illustrator who produced a string of powerful and arresting works. She was a close friend of the poet Ezra Pound and her work Penny for the Guy, which depicts a faceless man in a jester’s hat clutching a grenade, is on display, too. “It’s an allegorical piece about the politics of war,” adds Llewellyn.

The exhibition features artists from all kinds of backgrounds, like Marlow Moss a founding member of Abstraction-Creation – an association of artists set up with the aim of promoting abstract art. Moss was also a transgender artist whose stylised and simplified grid forms were developed alongside her close friend Piet Mondrian.

In many cases, though, she was shocked by how little information there was about these women. “I had trouble finding out even basic facts about many of them, such as when they were born and died.

“I looked through the list of some of the previous scholarship winners and prize winners of the Slade Fine Art Prize and I hardly recognised any of the names.” Llewellyn believes this makes their work even more significant. “They had to be strong and in some instances they even had their styles appropriated by male artists.”

It’s another reason why their work deserves to be more widely appreciated. “It’s important for these artists to have their talent acknowledged because they often faced obstacles and injustices during their lifetime, and it’s important for the future status of women artists,” she says.

“There are so many more stories to be told and hopefully this exhibition will encourage more research and more debate and help raise the profile of these remarkable artists.”

This article appeared in The Magazine (The Yorkshire Post) on Saturday May 18, 2019.