The Artist Who Found Fame at 101 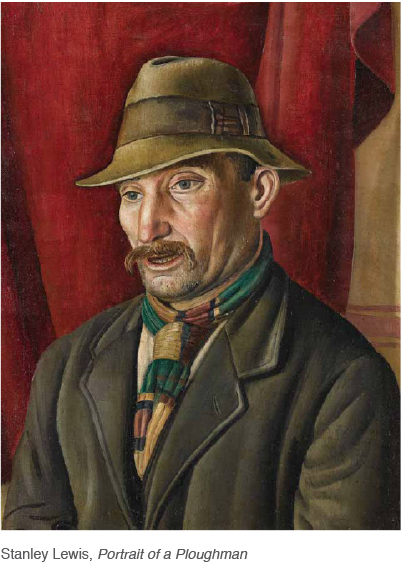 An artist who rejected the call of the art market in his youth, and was discovered surrounded by a lifetime of unseen work when he was more than 100 years old, is to have his first museum exhibition this month.Stanley Lewis was 101 in 2006 when he sent an email to art dealer Paul Liss, inquiring about his art-school contemporaries in the Twenties. Liss thought it was a spoof at first, but finding records of the artist in his archives, he went to visit him. “I thought he could tell me a lot,” says the dealer. “I wasn’t thinking about an exhibition.”Born in Wales, Lewis grew up on a farm and obtained a scholarship to the Royal College of Art where he was championed by Augustus John. Here he learned “good old-fashioned drawing skills” that he was to employ throughout his life, regardless of changing fashions and the pressure to modernise.

Of his realistic style and use of photographs from which to draw, he said: “I felt an inner force burning to capture my world around exactly as I saw it in the reality that is was.”Like many students at the time, his ambition was to paint murals, but he narrowly missed the Rome Scholarship that might have guaranteed him an income from public art commissions. Instead, he spent his professional life as an art teacher in Wales.Very occasionally, he exhibited at the Royal Academy’s summer show. A portrait of a mole catcher in 1937 was voted most popular exhibit that year, and snapped up by the Newport Museum and Art Gallery. Asa result, the Leicester Galleries, one of the most prominent dealers in London’ West End, made him a proposal, asking how many many pictures like that he could produce in a year. Lewis told them that it took him three years to make the picture, thought about their offer and, rather than produce rushed, inferior work, turned it down.Lewis’s teaching was interrupted by war-time service with the Royal Artillery, but he still managed to produce some war art; One painting, “The Attack on the Tirpitz by the Fleet Air Arm”, is in the Fleet Air Arm Museum in Somerset. After the war he returned to teaching to support a family with three children. He and his wife bought, restored and sold around 20 houses in 30 years, a practice that would have made them rich today, but not then. And every time they moved, Lewis would take his growing art portfolio with him – pinned on walls or rolled up in cellars.He was still working away when Liss visited him, by then a widower living in his daughter’s house overlooking the Yorkshire moors. As they talked, Lewis with cigar in one hand and a glass of whisky in the other, Lis was struck by the centenarian’s perfect recall and witty observations on contemporary art.Banksy’s skill with aerosol can and stencil came in for praise, but his view on Damien Hirst was that he “should place himself and Saatchi in a tank of formaldehyde together with their millions [of pounds] and install it among a herd of cows.” However, that first visit was not a eureka moment for LIss. “There were thousands of drawings, some inevitable failures, and paintings covered in mildew,” he recalls. “There was no stylistic development throughout his life, and I had no idea how it would be received commercially. Gradually I began to untangle the mountain of material, and a coherent picture started to emerge. I knew that, even if he wasn’t a hugely important artist, this was an intriguing discovery. I wanted to tell the story.” Then followed three years of research, some expensive restoration, and a further £40,000 investment in catalogue production. Living in France, and with no gallery, Liss found a receptive ear in Tom Perrett at the Cecil Higgens Art Gallery and Bedford Museum, who welcomed the idea of hosting such an unusual exhibition that also complemented the gallery’s exiciting collection of works by William Rothenstein, the Principal of the Royal College, Stanley Spencer, and Augustus John. The exhibition promises to be an eye-opener, with nearly 100 works, including Lewis’s Rome Scholarship murals and their drawings, most on public display fornthe first time. The majority is for sale, priced from £400 to £68,000 for 10-ft mural of Hyde Park, though, as Perrett is quick to point out, the museum has no stake in the sales.Sadly, Lewis died last September, while the exhibition was being planned. But at least he knew that recognition was at hand.