The Great War as Recorded through the Fine and Popular Arts

.. save your money for a really splendid catalogue: a hefty 240-page tome published by Liss Fine Art
to accompany their fabulous Great War exhibition at Morley Gallery, just a few minutes’ walk from the
Imperial War Museum. It costs £25, but is worth every penny, being packed with illustrations, anecdotes
and history. 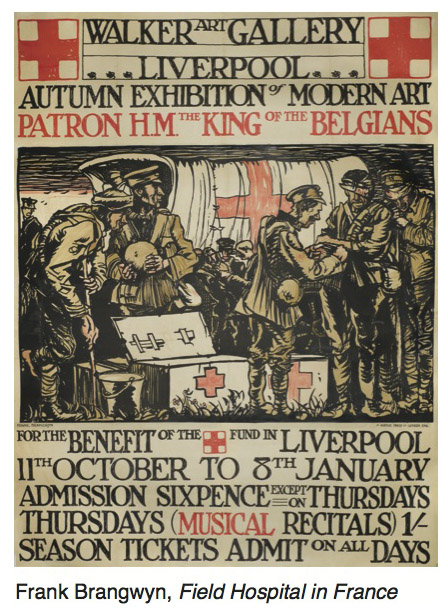 Liss Fine Art was founded in 1991 by Paul Liss and Sacha Llewellyn, and specialises in ‘the unsung
heroes and heroines of British art from 1880 to 1980’. The firm operates from France and does a lot of
dealing on the internet, but makes regular appearances in London, as well as taking an annual stand at
the 20/21 British Art Fair at the Royal College of Art, Kensington Gore, SW7, this year running from 10
to 14 September.

The Liss show is the product of several years’ work and presents a range of art and artefacts that is
almost overwhelming in its diversity and richness. The catalogue illustrates more than 200 items and
there are many more exhibits from the distinguished collection of wartime objects of David and Judith
Cohen. (These include trench art, commemorative ware and sweetheart brooches, many of which are
displayed in four large free-standing cabinets over the road in the foyer of Morley College itself.)

At Morley gallery, the paintings jostle with the photographs,the posters with sculptures, prints and
drawings, the postcards with miniatures, silhouettes and ceramics. The catalogue is arranged
thematically in three main parts: ‘Combat’, ‘The Home Front’ and ‘The Aftermath’, and, as the curators
say, it is in the popular arts that they’vefound some of the most poignant and unfamiliar images.

I particularly liked some of the posters: the vast Frank
Brangwyn lithograph ‘Field Hospital in France’, (see
illustration) which Liss bought in three separate parts
and reunited, is perhaps the most extraordinary.
Outside, Lord Kitchener exhorts you to enlist from one
of the gallery’s window displays (a lovely feature at
Morley); in another are a group of small Brangwyn
drawings and an army uniform; a moving religious
triptych by Percy Jowett holds the eye in another; in a
fourth are trench tanks.

The gallery’s interior is equally fascinating, with a
handwritten copy of the naval signal announcing the
surrender of the German fleet; a dramatic little oil of
a dance of red-gold flames in a patch of darkness
(a Zepplin shot down); a yellowish drawing of a gas
bombardment; and a pugnacious greengrocer outside
his shop, which bears the sign ‘Business as Usual
During the Alterations of the Map of Europe’. And
much, much more. The exhibition at Morley is a
museum show, but when it transfers to the Strand
Gallery (32 John Adam Street, WC2) for Armistice
week (11-15 November), nearly everything will be
for sale, with prices ranging from £50 upwards.
Don’t miss it.