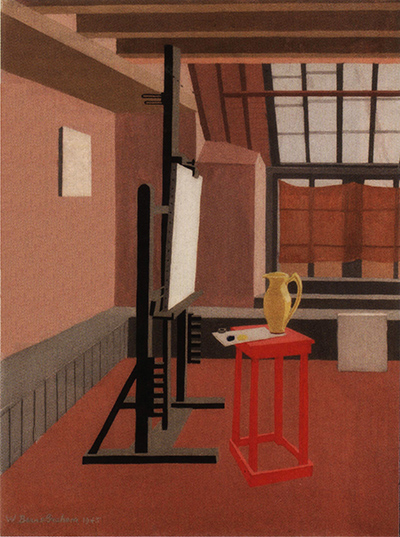 LISS LLEWELLYN at THE MERCERS’ COMPANY

‘Pure’, ‘bewitching’, ‘naive’: it was not unusual for British women’s artworks in the 20th century to be characterised by male critics in terms of bon sauvage stereotypes, suggestive of decorativeness and, ultimately, inconsequentiality. Conversely, the very worst that could be said of a woman’s art was that it was masculine. One way women could subvert gender categorisation was by embracing abstraction; another was by adopting ambiguous names (Marjorie Moss became Marlow Moss, Dora Carrington shed the `Dora’). Their work neglected, many of these artists fell into obscurity. The fruit of a collaboration between the Stanley & Audrey Burton Gallery in Leeds and curator Sacha Llewellyn of Liss Llewellyn, specialists in the unsung heroines and heroes of British art, this exhibition seeks to redress the balance – not only in a spirit of feminist archaeology, but also to bring more good art to light. In existential terms the artists selected had much in common. There was the universal yearning, often frustrated, to be able to paint without interruption in a room of one’s own’. There was the struggle between domesticity and creativity illustrated in such works as Cecile Walton’s ironically titled Romance (1920), which shows the artist reclining on a chaise-longue like Manet’s Olympia, but holding a baby and with her space invaded with domestic obligations, or in Hilda Fearon’s Studio Interior (1914), where a mother sits in her makeshift studio with her two young daughters, a blank canvas abandoned on its easel next to an unmade bed. As expressions of creativity, however, what each work reveals is glorious idiosyncrasy, from Daisy Borne’s monumental marble sculpture Madonna of the Adoring Angels (1939), with its Jazz Age putti, to Eileen Agar’s small, colourful and complex The Happy Breakfast (1937), a painting that mimics the formal procedures of collage; from British Abstraction pioneer Wilhelmina Barns-Graham’s jubilant Studio Interior (Red Stool, Studio) (1945), which depicts the artist’s first studio in St Ives, pregnant with creative potential and anticipation, to works that transcend the wartime agenda that informed them, such as Ethel Leontine Gabain’s Women’s Work in the War (other than the Services) c1940, a lithograph of pilot Captain Pauline Gower at once energetic and melancholy. Highly illuminating are the commentaries, each by a scholar, curator or member of the artist’s family, that accompany the works. Prudence Bliss, daughter of Phyllis Dodd, and the model for Prudence on Pegasus (1937 -38), remembers the artist’s indignation when her husband, artist Douglas Percy Bliss, ‘lent a hand’ by adding to the background while she was in the kitchen. Of Winifred Knights’s dreamlike, luminous landscape Edge of Abruzzi; Boat with Three People on a Lake (1924-30), her son John Monnington writes movingly: ‘When I was a schoolboy I was slightly aware of there being something exceptional about my mother, but I was totally ignorant of her true abilities.’ This is a fascinating show, full of revelations and new lines of enquiry.

Touring to the Stanley & Audrey Burton Gallery at the University of Leeds, 9 April – 27 July 2019.

This article appears in the January 2019 edition of The World of Interiors, copyright © THE WORLD OF INTERIORS/CONDÉ NAST PUBLICATIONS LTD.