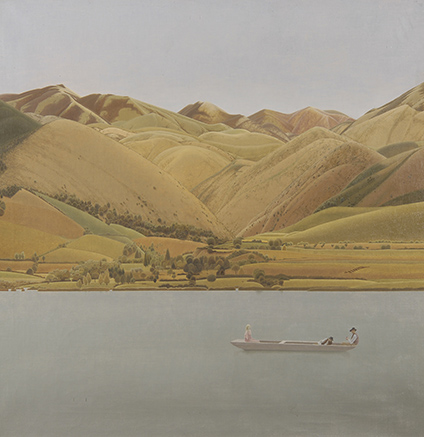 Museum MORE in Gorssel, The Netherlands

Museum MORE presents a comprehensive retrospective exhibition on British realists of the 1920s and 1930s. For Real will be the first exhibition outside the UK to focus on the subject, with 75 works by 35 different artists that tell a remarkable and fascinating story of largely forgotten art from between the two world wars.

The title For Real is intentionally ambiguous, as not all figurative art can be described as realistic. Museum MORE has assembled a carefully curated selection of dozens of works that conjure up an extraordinary and intriguing world that somehow also contrives to be familiar. There is a kinship with international neorealism, but it is also unmistakeably and quintessentially British. There are elegant stiff-upper-lip portraits, naïve working-class scenes, hushed landscapes and city views as well as alienating still lifes that contrast strongly with other highly expressive and intense works. This broad and varied spectrum introduces a fresh view on the artistic developments on the other side of the Channel in the Roaring Twenties and the Dirty Thirties. There are forgotten society portraitists such as Meredith Frampton and Gerald Leslie Brockhurst alongside war painter Christopher Nevinson and the odd-one-out, Stanley Spencer. Also included in the exhibition are several high-calibre female artists, such as Dod Procter, Hilda Carline, Winifred Knights and the Zinkeisen sisters.

Creative Director Ype Koopmans on For Real: “Museum MORE likes to take a regular look beyond the borders of the Netherlands. This autumn we will be putting the spotlight on the crème de la crème of British realistic painting in the 1920s and 1930s. Actually, we always love to highlight how prominent and powerful figurative art was all over the world during the first half of the 20th Century. After the Second World War, a number of misconceptions arose about who and what had been influential between the wars. You could almost call it a falsification of history. At the time, the early-modern avant-garde was already seen as being old-fashioned, as having run its course. But, ironically, that style happened to sit well with the tastes and opinions of post-war art critics, particularly in the 1960s and 1970s. This is still the case today. This is why we would like to redress the balance, to rediscover greatness and to restore the rightful place in history to artists who dared to swim against the tide.”

The idea of For Real was born following the acclaimed exhibition True to Life at the National Galleries of Scotland in Edinburgh in 2017. Koopmans saw the exhibition on its very last day: “Even British experts and art critics were amazed – and rather ashamed – that so much high-quality art had fallen into obscurity. They’d never even heard of some of the artists. Museum MORE has selected loans from TATE, the National Portrait Gallery, National Galleries of Scotland, The Ashmolean Museum, Royal Academy of Arts, Ferens Art Gallery and the Stedelijk Museum Amsterdam, amongst others. These are supplemented with special works by artists who cannot readily be categorised as ‘British’, which makes them especially interesting. Some of these works are from private collections. It was primarily private collectors who ensured that realistic art was preserved, as museums and other institutions almost completely ignored the genre. This was not only the case in the Netherlands, but all over the world.”

For a long time, it was thought the British figurative art between the wars had been impervious to international influence. It was presumed to be essentially conventional, founded on local traditions. Koopmans: “Certainly, British art historians were convinced of this, possibly fuelled by a typically British mixture of an inferiority complex and a pride in their splendid isolation. But is this supposition correct? While we were selecting the loans and writing the exhibition catalogue we came to the conclusion that British artists must almost certainly have been more aware of international developments in art than has previously been assumed. It’s true that at the academies, students were subjected to strict regimes set out by formidable lecturers and art gurus who preached months of classical preparatory studies and traditional-craft technique, and yet these young Brits were not completely cut off from the world beyond their own shores. Many of them had endured the horrors of the trenches of the First World War on the European mainland, they had taken courses at liberal academies in Paris or travelled to Italy. Others visited the United States and elsewhere during the course

of their career. This was in stark contrast to the lack of attention paid to all those ‘European novelties’ in art publications back home, and the clarion call of the art establishment to be sure that they produced ‘typically British’ art.” They were expected to immerse themselves in their own national character, and heaven forbid that they would allow themselves to be seduced into copying the big, brash and compelling art that emanated from the continent. Above all, they should not take as examples the likes of George Grosz or Otto Dix and the German ‘Neue Sachlichkeit’ with its raw, uncompromising and even ‘tasteless’ take on the state of humanity: “We wish to avoid freaks and freakiness.”

One of the artists who operated beyond these strictures was Stanley Spencer (1891-1959). Spencer, who resided in obscurity for decades, is now seen as one of the foremost British artists of the first half of the 20th Century. At first, he was often viewed with suspicion as being eccentric and naïve, and obsessed with an unorthodox sense of spirituality that led him to set Biblical scenes in the wondrous décor of his home village of Cookham. Paradoxically, this approach makes Spencer’s oeuvre both pastorally English and disconcertingly expressive. It is thought that his quirky work inspired later artists such as Lucian Freud. It is easy to see what would have fascinated Freud in a work such as Spencer’s Self Portrait from 1936. This painting forms a clear link between his romantic-naturalistic and anecdotal work and his later style of painting: the frowning, slightly squinting expression, the pursed lips, the sinews on his long neck and the low-cut vest. Clearly, this painting is reminiscent of Dutch contemporaries such as Dick Ket. And it would not be far-fetched to discern a kinship with the German Neue Sachlichkeit. An interesting footnote is that the painting was promptly acquired by the Stedelijk Museum in Amsterdam, the first museum to buy a work by Spencer outside his own country. The sale is especially noteworthy due to the fact that there was very little interest in collecting contemporary foreign art at the time.

At the other end of the spectrum we can find Meredith Frampton (1894-1984), who was one of the most respected society painters of his generation. His chic clientele included the Duke of York, later King George VI, whose portrait he painted. One of Frampton’s most celebrated works is A Game of Patience. The model was Miss Margaret Austin-Jones, a redhead who was 25 years old at the time. The painting had its first public airing during the Royal Academy summer exhibition in 1937. A critic for The Scotsman described it: “It is a tour-de-force of fastidious craftsmanship. The subject is a girl seated at a table playing cards (…) surely no Englishman has painted in a way so learned and so deadly”. Frampton’s particular attention to hands and faces is immediately evident in his paintings. The painstaking precision of his work resulted in his only being able to complete a small number of paintings each year. Frampton’s elegantly cool and impassive work bears a certain resemblance to the Dutch painter Carel Willink.

Only recently, has the ‘modest’ oeuvre of the short life of Winifred Knights (1899-1947) been rediscovered. She was recognised at a very early age as one of the most extraordinary talents of her generation. Knights studied at the Slade School of Fine Art in London, a college that had admitted female students from its inception in 1871. In 1920, she competed in and won the Prix de Rome as the first woman ever, with a monumental canvas in a modern figurative style that bore influences of the Italian art of the Quattrocento. After winning this prestigious award, Knights was allowed to stay at the British School in Rome where she met her future husband Walter Thomas Monnington who had also won the Prix de Rome. They returned to Italy in 1924, where she began work, in the mountain village of Piediluco, on Edge of Abruzzi, a work she would only finish in 1930. This work saw her previously muted colour palette give way to a vibrant, sun-kissed panoramic landscape and a lake, its still surface like a mirror. There are three tiny figures in a rowing boat: Monnington at the stern with an oar, the reclining, bearded man in the middle, a Swedish artist whom they had met in Rome, and Knights herself at the bow. There is no trace of any action as the trio float in an inert landscape. The first owner of the work was Stephen Courtauld, a member of the famous family of textile barons and a well-known patron of the arts. It is unlikely that Knights would have sold many more works to collectors, as her perfectionism meant that it would often take years for her to finally let a painting go.

Winifred Knights was one of many British realists in the 1920s and 1930s who embarked upon a form of ‘Classical Revolution’, not unlike that of their counterparts in Continental Europe. They built on the typically British Pre-Raphaelite movement, but also delved further back into history with Italian Renaissance art and the Flemish Primitives, modernising ‘classical’ styles and methods along the way. The reverse was also true, they were packaging contemporary themes in classical forms, each artist doing so in their own inimitable fashion. The scale is so broad that there was no such things as an actual movement. It is worth noting that the British, in contrast to their Dutch colleagues, were mostly academically trained in painting and drawing techniques including tempera and laborious glazing techniques. This allowed them to achieve a smooth and technically perfect touch. Koopmans: “Dutch painters such as Carel Willink, Pyke Koch, Dick Ket, Wim Schuhmacher and Jan Mankes were never taught these techniques. They were expected to educate themselves in the tricks of their trade and pored over Max Doerner’s famous 1921 manual as if it were a self-help book.” Visitors to For Real will have the opportunity of seeing Museum MORE’s own collection of neorealists as well as those in the British exhibition. Koopmans: “There is certainly a fascinating contrast: The uncertainties and fears of the 1930s are sometimes clearly present in the works of our Dutch artists, but the British seem less afraid of an unpredictable future. Theirs is sooner a sense of melancholic yearning for a sheltered and private paradise.”