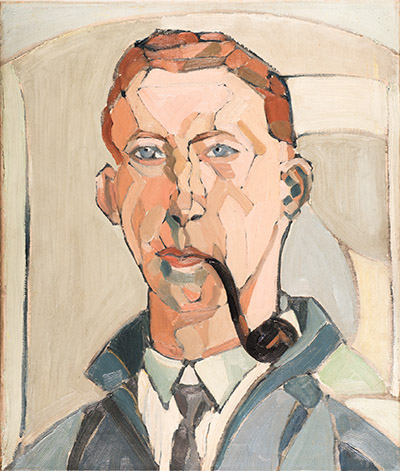 Karl Hagedorn’s contribution to Post-Impressionist art in Britain has been neglected for too long – a new exhibition at Chichester’s Pallant House Gallery seeks to right that wrong and put this intriguing figure back on the map.

In December 1910, the painter-critic Roger Fry shook the London art world when he launched the exhibition Manet and the Post Impressionists, at The Grafton Galleries. Cited as ‘the Art-Quake of 1910’, it was lampooned by London critics and proved a disastrous blow for his career.

Fry had introduced the London public to the work of the late Post-Impressionist artists such as Cézanne, Gaugin, Seurat and Van Gogh, and they found it scandalous. Not only did the pictures lack accurate representation, they prioritised form over content – often with distorted and simplified shapes and patterns that both challenged and insulted the conventional British aesthetic. In her essay Bennett and Mrs Brown, Virginia Brown wrote ‘On or about December 1910 (…) human character changed.’

It was within this context that one of the earliest Post-Impressionists in Britain, Karl Hagedorn (b. 1889), was working in Manchester. He studied at the Manchester School of Art under the French Impressionist painter Pierre Adolphe Valette and then at the Slade School of Fine Art in London.

Although born in Berlin, Hagedorn emigrated to England in 1905 at the age of 16 and travelled extensively across Europe throughout his career. Circumstances were uneasy for a German living in wartime Britain – for Hagedorn in particular, as he was thought to be the illegitimate son of Kaiser Wilhelm II – but, undeterred, he volunteered for the British Army, where he served from 1914-19.

With the rise of photography, Hagedorn no longer felt the need for art to be so representational; instead, he sought inspiration from artists on the continent. A pivotal point in his career came when, on moving to Paris to work in the studio of Maurice Denis in 1912, he met his artist-hero, Henri Matisse. Hagedorn idolised him – he even kept a cigarette given to him by Matisse as a souvenir for the rest of his life, an act which embodied the profound impact that Matisse had on his work. Modern British art history has struggled to place Hagedorn, mainly because of ignorance of the Post-Impressionist style at the time, and there has been little recognition of his significance since. But now the Pallant House Gallery, in partnership with Liss Llewellyn Fine Art, has staged their first exhibition devoted to the artist’s work.

The painting Village Street was made in 1916, the year that the artist’s only child was born (tragically, she died aged twelve). It was also the year of his first exhibition at the Society of Modern Painters, Manchester, to which he became secretary.

Hagedorn’s palette of contrasting primary colours and angular forms exemplifies his bold innovation and the very ‘un-British’ influences that alienated his work from British art history. Though devoid of people, the village scene is animated. Globular, yellow lollipop trees stand like troops as the sun beats down onto the houses, illuminating them with a stark brightness.

The mottled brush marks and bold outlining suggest the Pointillist influence of European contemporaries. The strangeness of the jarring shapes, termed ‘cubist puzzles,’ left the critics baffled and lead to comparisons with the ‘barbarous’ and ‘wild’ Fauves.

Hagedorn’s ‘rhythmical expressions in line and colour’, as he described them, are among the earliest examples of Post-Impressionism in Britain. His oeuvre widened to include commercial designs for posters advertising washing powder, Margarine or simply to ‘Buy British’, as well as Manchester University’s ‘Rag mag’ covers.

However, by the 1920s, in keeping with the ‘return to order’ that characterised much of the art produced in the wake of the First World War, his landscape painting had retreated from its earlier more radical Modernism.

The exhibition Karl Hagedorn: Rhythmical Expressions illuminates the role that this overlooked artist played in introducing Britain to a radical European style that would play such an important part in the development of Cubism, Art Nouveau and German Expressionism.

This article appeared in the October 5, 2018 edition of Country Life.