A forgotten figure ripe for revival 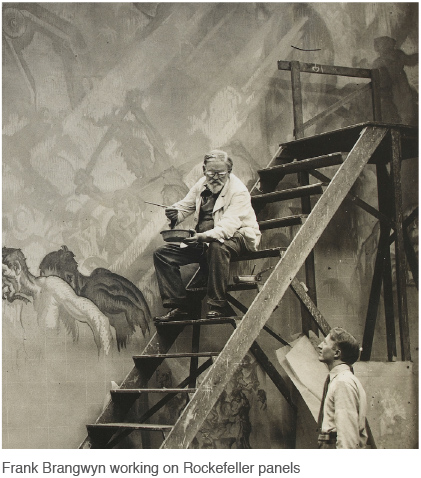 Frank Brangwyn, born in Bruges, Belgium of Welsh parents, died in 1956 aged 89 and loaded with honours domestic and European, a knight of the realm and full royal academician of long standing.

He was self-taught, astonishingly prolific and widely travelled. in the years before the first world war, he was as famous internationally as any British artist can ever have been in his lifetime, being a founder-member of the Vienna Secession and star of Venice at successive Biennales.
His vastly ambitious mural schemes were in demand not just for civic halls, company offices and exhibition pavilions in Britain but around the world. And at the last, two years before his death, the Royal Academy paid him the signal honour of a full retrospective, the first for a living artist in its history. Yet how quickly he was all but forgotten. Even by the 1960s he was known only to the student of early 20th century British art, and embarrassedly so at that.
Is it possible, perhaps, to be an artist too much of one’s time? With Brangwyn certainly, even in his pomp, the signs of controversy, if not of ultimate critical rejection, had long been there. He was too successful perhaps, too much the establishment figure. By 1914 he was only too ready to be damned by Wyndham Lewis for his decadent irrelevance. What with Lewis on the one hand and Roger Fry on the other, with his post-impressionist orthodoxies that were to set the modernist critical agenda for the next half-century, Brangwyn really could never win. By the late 1940s, along with Alfred Munnings and the academy as a whole, tarred with the brush of reaction against cubism and surrealism and all their works, he was by then, in many eyes, quite beyond the pale.
Yet the real problem would seem to be that Brangwyn, like so many other artists of his time, both British and foreign, who were similarly air-brushed out of the main 230th century picture – Munnings, Anders Zorn, Peter Kroyer for example – is not so much that he was not modern enough but rather that he was a modern painter of the wrong sort. For no one could have seized upon the example of the impressionists and their immediate followers, and the expressive opportunities it afforded, with more energy and enthusiasm, nor with more technical bravura.

And yet was that technical bravura also part of the problem? The avant-garde’s insistence, that either you were with it or against it, is one of its abiding characteristics, and being with it through the 20th century so often entailed a distrust of flair and technical command, or at least a dissimulation in their respect, along with a necessary embrace of theory and principle. The truth is of course, not that one approach is wrong or right, but that there is room for all.

So to come upon Brangwyn now at his sometime dealer, the Fine Art Society, in properly representative though limited quantity, is to be struck not just by the remarkable scope of his engagement – not just painting, print and drawing but applied design of all kinds – but by simply how good he is, and fresh, and, above all, so free and radical in the statement. A large painting of “Susanna and the Elders” (1908), all shadows and dappled sunlight in a Zorn-like grove, is, at the most obvious level, straightforward turn-of-the-century impressionism, yet the handling already evinces a loose and open expressionism, and not just in terms of the currency of the time. Taken on its own, the lower left-hand quarter of the canvas, ostensibly depicting Susanna’s carelessly discarded clothes, could stand quite happily with any expressionist abstraction painted even today.

A group of oils and large watercolours of Venetian subjects – a boat near the Dogana; boatyards near San Pietro; the back of the Frari; palazzi on the Grand Canal – are especially notable, as idiosyncratic in their imagery as in their vigorous accomplishment, a Venice full of life and narrative bustle made quite his own. More than welcome, this exhibition, small as it is, and to many inevitably a surprise, is long overdue. Brangwyn deserves now a full reassessment and revival.